A coin collector has

and wants to collect $2$ euros.

Going on, these two packages are merged with the €$1/2$ coins and sorted. Finally, coins and packages of €$1/2$ are processed, which gives three packages of respective numismatic values $11$, $19$ and $28$. The picture illustrates the whole process. 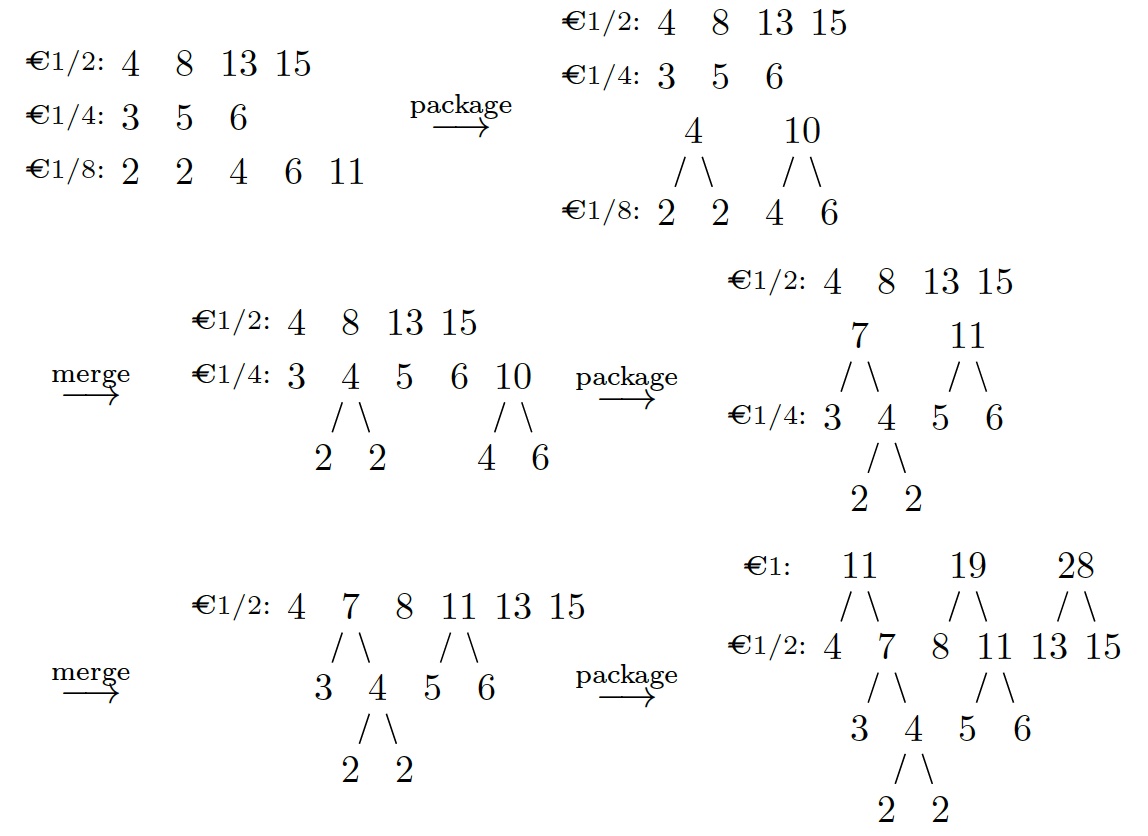 Given the frequencies of alphabet letters, the Huffman algorithm builds an optimal prefix code to encode the letters in such a way that encodings are as short as possible. In the general case there is no constraint on the length of the codewords. But sometimes one may want to bound the codeword length. Building a code satisfying such a constraint is the subject of this problem.

The coin collector's problem is an example of where the constraint is used. Collectors have coins with two independent properties: denominations (currency values) and numismatic values (collector values). Their goal is to collect a sum $N$ while minimising the total numismatic value.

Let denominations be integer powers of $2$: $2^{-i}$ with $1\leq i \leq L$. Coins are organised as follows: there is a list for each denomination in which coins are sorted in increasing order of their numismatic values.

Design an algorithm that computes for a list of $n$ frequencies an optimal length-limited Huffman code in which no codeword is longer than $L$ and that runs in time $O(nL)$.
Reduce the problem to the binary coin collector's problem.

Algorithm PackageMerge$(S,L)$ implements the strategy described in the example for a set $S$ of coins with denominations between $2^{-L}$ and $2^{-1}$. Package$(S)$ groups two by two consecutive items of $S$ and Merge$(S,P)$ merges two sorted lists.

Eventually, the first $N$ items of the list PackageMerge$(S,L)$ have the lowest numismatic values and are selected to form the solution.

Both Package$(S')$ and Merge$(S',P')$ run in linear time according to $n=|S|$. Thus, provided that the lists of coins are already sorted, the algorithm PackageMerge$(S,L)$ runs in time and space $O(nL)$.